Highlining, World Records and Safety: A Chat With Julian Mittermaier

Julian Mittermaier was born in 1992 in the alpine region of Bavaria in the south of Germany . He experienced the beauty of the mountains at an early age, and over time he has come to treasure their beauty more and more. First there were solo hikes in the mountains, then climbing along with extended trips exploring the Bavarian alps on a mountain bike – all of which awoke in him a desire to include more of such experiences in his life. When he stood on a slackline for the first time in 2010, he quickly found that he had an affinity for this sport, and it soon became clear that he had to somehow connect slacklining to his love for the mountains: A passion for highlining was born.

How did you get into slacklining and highlining?

The start was really pretty unspectacular: my first contact with a slackline was in 2010 when a girl I knew bought a slackline. We tried it out together and I stuck with it, so I bought my own line. Then I met another slackliner in the small town where I lived, and he was really serious about it – it was pure luck that I ran into him . Soon thereafter a group formed and we started with highlining, which was great in the area around where I lived. Next came the first festivals, like in the Czech Republic, Switzerland and Germany – that’s how it went.

One of the cool things about highlining is that it is a very safe sport because you know all the risks involved..

The whole thing looks kind of dangerous – how do you prepare?

The actual level of risk is debatable because I try to do everything I can to make it as safe as possible. One of the cool things about highlining is that it is a very safe sport because you know all the risks involved. If you pay attention to these things, you can make highlining very safe. Naturally there’s a big mental component because you’re up in the air so high, but in the end it’s actually very safe.

Generally my preparation for highlining is highlining – I do it as often as possible to keep my body in top condition, just like any other sport. The same goes for the mental side…you get more used to being on the line the more you do it. As you learn to stay calm, little by little you’re able to do more and more on the line. Just before slacklining or highlining I do some stretching and warming up. You have to get into what you’re doing, but that happens pretty automatically once you’re on the line.

You have to be very concentrated…do you think that makes one more attentive in everyday?

I do think slacklining has made me more aware of things and more concentrated overall. You’re right that one has to really focus the whole time. That’s very important to me in everyday life too – on the line you learn to always be on the ball because you just don’t have the option to make any big mistakes. I also don’t take anything with me – like no music. I’m only focused on the line. At first I actually listened to music in order to take my mind off what I was doing at the time. Sometime I decided that that didn’t make much sense though, instead it’s better to just enjoy being there. I walk the highline in order to enjoy the moment and the feeling of being on the line. Now I don’t listen to music anymore so I can concentrate on the line in a more focused way, and pay attention to whatever happens.

What is your favorite highline?

In general I find lines between between 60 and 200 meters to be the best because one can work with this length well, which is an important point for me. My expectation for a line is that it’s either a challenge to walk it, or that I can play on it…like doing some kind of tricks. That’s more interesting than the length because anything over 200m is not so exciting to walk. Every meter one adds to that does not add to the challenge – it just adds to the amount of time that one is on the line. Then again shorter lines are also not interesting because you can’t play with the movement of the line. Tricks are also more difficult on shorter lines because of the tension. 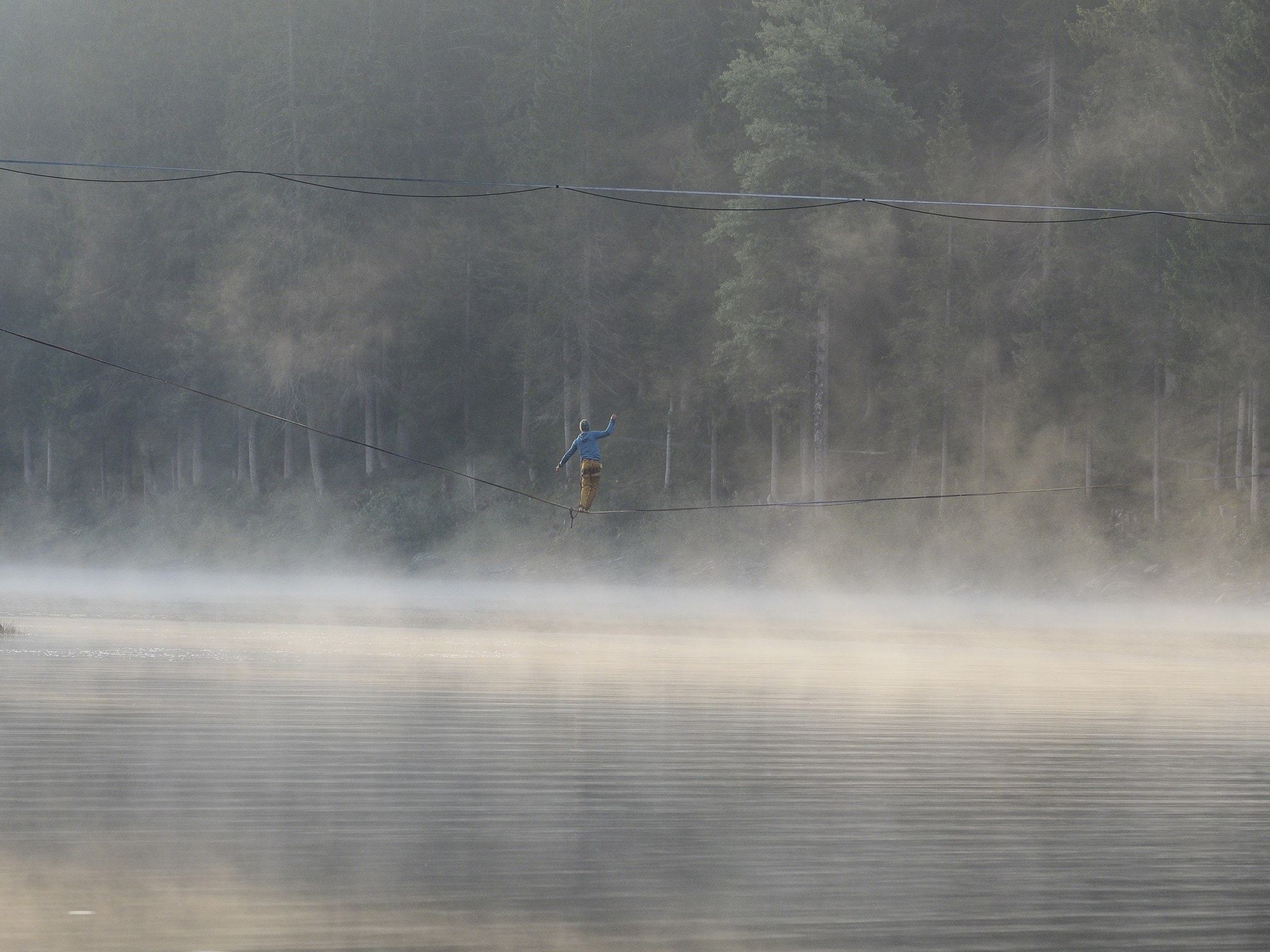 You have achieved many world records – how do you deal with setbacks as well as success experiences?

I don’t experience so many setbacks anymore, but recently I had an experience that was very new for me. I was on a line, and for some reason I was agitated and not completely concentrated. That bothered me at first, so I got off the line and took a break. I waited until the next day to try it again. I set up the line so that it was harder for me – really as difficult as possible – and I kept at it. It was more of a rodeo ride, but all of the sudden I could start doing something with the line. Once I was good on that line, it was a triumph.

I really like successes in which I manage to do something new and improve my personal performance. That’s the only way for me to stay motivated. It is important to keep developing and not stagnate in terms of what you can do. Clearly I like it whenever I achieve something, but in the end it’s about sticking with it. It is important to not rest on one’s successes, because sooner or later you have to go even further. In the end it’s a process that is all about becoming better.

The most important thing is sticking with it, and not allowing yourself to be discouraged just because it doesn’t work right away.

I don’t set any goals for myself now, meaning that I don’t specifically set up lines for some purpose. That would just make things too complicated. Basically I take things as they come, and I try out different lines.

My general goal is continuous improvement: I would like to constantly be improving myself. My goal on the line is control – that is an important point for me. I want to maintain as much control of the line as possible because I have to do that for tricks. An important part of this is always upping the difficulty, like for example doing something on one leg or walking with closed eyes. If you set things up so that they’re as difficult as possible, you create situations for yourself in which you inevitably have to regain the control.

What would be your advice for beginners?

The most important thing is sticking with it, and not allowing yourself to be discouraged just because it doesn’t work right away. At first might not even be able to stand on the line for two seconds without losing your balance. You shouldn’t let that get you down, instead you should just keep going. Over time it will become easier, and under no circumstances should you allow yourself to take the fun out of what you’re doing.

What are your next projects? Are there some more world records that you’d like to break?

The excitement for me is not breaking world records; I find real excitement when I can set up aesthetically pleasing lines in the mountains. If it takes me four hours to carry all my gear up a mountain, I know that I can be in the right place for myself mentally. That means that I can do more than before, and in the end I get to have a more beautiful experience. It is exciting because after a hard four-hour climb, I have to get on the line again – here one has to really draw on that last little bit of energy. That is actually the direction in which I would like to go. I still haven’t planned out everything I’m doing this summer, so let’s just see what happens – I’m sure it’ll be something good!